In the summer of 1992, anticipation was growing for the fall release of Sonic 2. Gaming magazines supplied a steady diet of prototype screenshots to eager fans.

The Sonic 2 Prototype is the most famous of the unreleased Sonic games. Most of it actually remained intact in the final version, but the zones that were removed have undoubtedly captured the imaginations of gamers around the world. Most games have received greater modifications than Sonic 2, including Sonic games. Zones like the Hidden Palace have become legends because the formidable Sonic 2 prerelease hype made them so visible to so many. The changes that we know about are only a small fraction of the many changes that must have taken place during the development of Sonic games.

This page is under heavy construction. Info on other prototype zones, such as the Wood Zone, will be coming later.

I was one of the few gamers who played Sonic 2 before it was released. SEGA had a promotion at the Kay-Bee Toys of my local mall. The first thing I noticed was the change in the title screen. I thought that I was playing a prototype, and I remember hoping that the version from the magazazines would be used - both are good, but the original looks a little cooler, IMHO. Though the prototype title screen wasn't used in the release version of Sonic 2, it was used in Sonic 2 for Game Gear.

When the Hidden Palace didn't show up in the instruction manual, most players assumed that it was a hidden zone, and that it would become available after all the emeralds were collected. Unfortunately, this wasn't the case. Although the level itself is accessible through a Game Genie or Pro Action Replay, the picture is messed up because the zone graphics were not stored on the cartridge.

Here are the magazine screen shots that started the fascination with the Hidden Palace Zone: 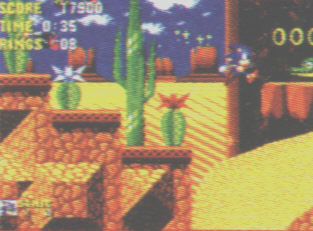 The most mysterious of all the Sonic 2 prototype pics. This zone is generally known as Dust Hill, even though that was definitely the prototype name for the Mystic Cave Zone. I'm not sure where the name came from, but I first heard it used by Saturnman. According to one theory, Sega decided to take this zone out because they felt that a western desert zone wouldn't appeal to a Japanese audience.

One of the many strange things about this scene is Sonic's running. He has just collected at least 2 rings, but in order to get them, he would have had to through the 2 buzzers. If this pic is a real screen shot of a game in progress, I can see 4 possible explanations.

The easiest way to resolve the mystery is to dismiss this zone as a hoax. However, I'm pretty sure that this scene was created by Sonic Team. It's very unlikely that anyone would make such an elaborate hoax, and then make a mistake like leaving Sonic off-center. The art also fits perfectly with the Sonic 2 style. Most importantly, this scene closely resembles 2 other mysterious pics that are authentic. Read about them below in "The Off-Center Pics." 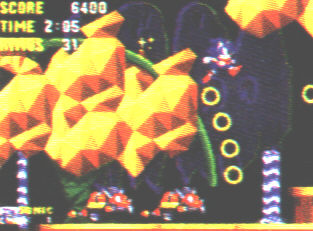 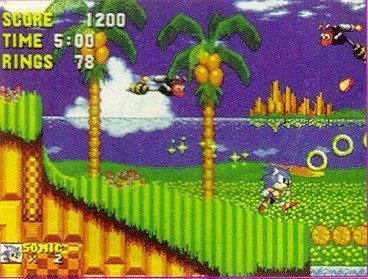 These are the 3 most mysterious screen shots from the Sonic 2 Prototype. All 3 show Sonic off-center, and all 3 have Sonic 1-style scoring text in the upper-left corner (later versions of Sonic 2 put this text in italics). 2 of the 3 show Sonic in an apparently impossible aerial maneuver. We know that at least 2 of these scenes are real - the Emerald Hill pic was published by Sega, and the pictured location of the Hidden Palace does exist (although modified) in the Sonic 2 Prototype.

It's most likely that all 3 of these scenes existed in a very early version of Sonic 2 - the game may not have been optimized, and the text had not yet been italicized. If you play Sonic 2, you might notice that in some places it's possible to get Sonic to run faster than the screen can scroll, so that he's off-center. Perhaps this version of Sonic 2 was simply less efficient, and this bug came up much more frequently.

It's also possible, though less likely, that these pics were fabricated by the Sonic Team as "concept art," or that these screenshots were taken in a level editor. Maybe these screens were given to the press when Sonic 2 was first announced, because of the lack of a working program.